Everyone knows that SSDs are faster than HDDs, but did you know that not all SSDs are made equal? In this article, we’re going to pit NVMe vs M.2 vs SATA in a three-way comparison battle to help you choose the right one for you. We’re going to explain what sets them apart, how each performs at their maximum specs (currently), and even take a brief look into the future to assess what’s coming next.

First, though, let’s explain the basics. 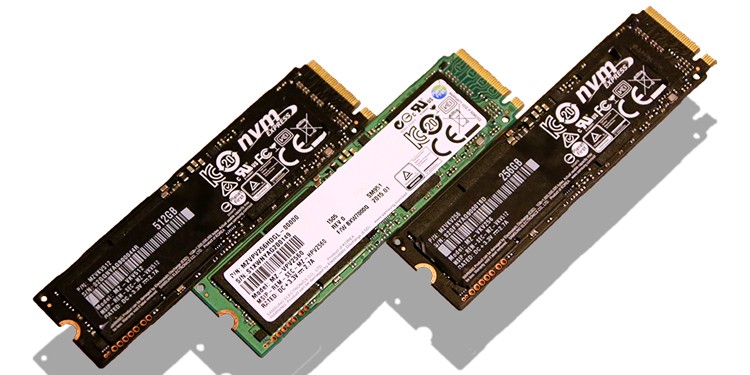 What even are these? What sets apart an NVMe drive from an M.2 drive? M.2 NVMe drives exist– is there even a difference!? Why bother buying an M.2 SSD when a SATA SSD is usually cheaper?

It’s time to answer all of these questions.

What is a SATA SSD? 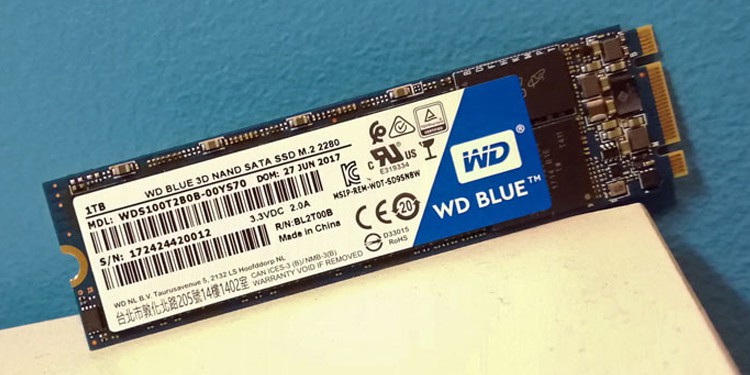 A SATA SSD is an SSD with a SATA interface. SATA, or Serial AT Attachment, refers to the storage standard that’s been used by PCs for nearly the past twenty years.

SATA HDDs and SSDs come in either 3.5-inch or 2.5-inch enclosures, respectively. HDDs can come in both (with a speed sacrifice for a smaller form factor), but SSDs are generally only shipped in 2.5 enclosures and are often even smaller on the inside.

SATA has evolved quite a bit since its initial release in 2000, but even the best SATA SSDs’ transfer rate caps out at around 600 MB/s in pure speed capabilities on the latest SATA 3 motherboards. (SATA HDDs, if you’re curious, cap out at around 110 MB/s.)

This speed is far faster than anything an old-school, mechanical HDD is capable of, so a SATA SSD is still a worthwhile upgrade over a SATA HDD. Compared to the others on this list, it’ll be the most noticeable leap in quality of life– but we’re getting ahead of ourselves. Let’s talk about the others, too. 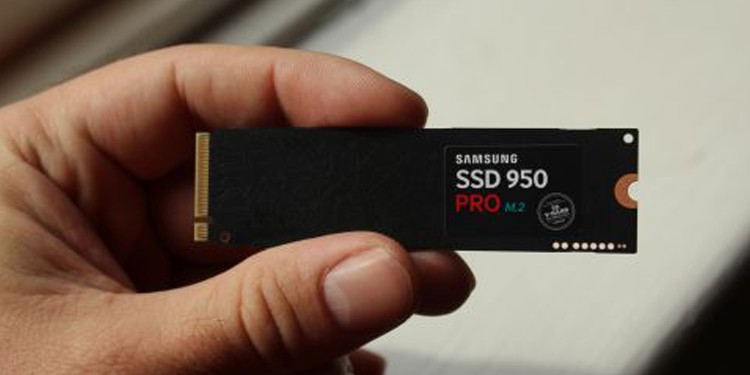 M.2 is the successor to the original mSATA standard (hence the “2”), and it greatly decreases the size of a given drive. M.2 drives only come as SSDs, since the format is far too small for a mechanical arrangement.

M.2 SSDs are most often seen in laptops, but many desktops are using the technology, too. Thanks to the minuscule size of an M.2 drive, using M.2 SSDs is quite the viable replacement to a SATA drive array, especially in small form factor PC builds.

Your typical M.2 SSD uses the motherboard’s pre-existing SATA bandwidth for its drive. This means it has the same speed limit as a SATA SSD would, it’s just smaller and doesn’t require running any extra cables.

However, some M.2 SSDs also come in the NVMe format. Not every M.2 SSD is NVMe, but every modern NVMe SSD is M.2. 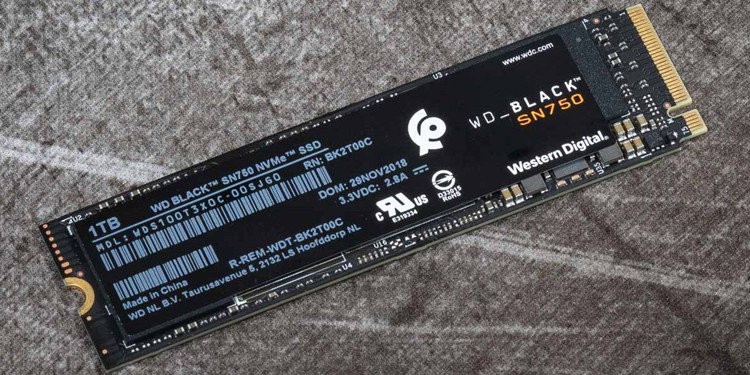 NVMe stands for Non-Volatile Memory Express. If the “Express” seems familiar to you, there’s a reason for that: NVMe expansions happen to use PCI Express bandwidth, as opposed to SATA bandwidth. That means the peak speed of an NVMe SSD is much, much higher than an SSD powered by SATA bandwidth, whether it’s 2.5-inch or M.2.

Let’s dig deeper into these differences, shall we?

How do they compare?

If you paid close attention to the previous section, you may already have an idea where this is going.

A SATA SSD’s max potential throughput is 600 MB/s, but in most real-world scenarios this actually ends up being just about 500 MB/s… maybe 550 MB/s if you’re lucky. This is roughly half a gigabyte per second– certainly not bad, by any means, but far from the maximum capabilities of solid-state storage.

If an M.2 SSD is using PCI Express bandwidth (via NVMe), then there’s no competition at all. Let’s talk about that scenario. 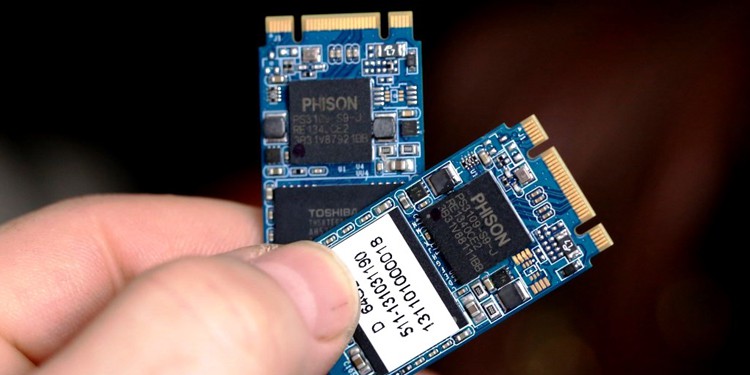 An M.2 NVMe and an M.2 SATA drive will look pretty much identical on the surface level: super-thin and about as long as your thumb. Modern NVMe drives are made to utilize PCI Express Gen 3 bandwidth, though, and this far exceeds SATA bandwidth in terms of speed.

Your NVMe SSD, meanwhile, can achieve speeds as high as 3.5 GB/s. That’s multiple times faster than even the best SATA SSD and it leaves traditional HDD technology in the dust as little more than a distant memory (unless you need bulk storage in which case your bank account might pull HDDs back into your perspective).

And that’s not even all, either…

What about PCI Express Gen 4?

PCI Express Gen 4 is around the corner with NVMe SSDs to match!

At the time of writing, this will only be for AMD’s X570 chipset… but Intel is sure to follow suit within a year or less. PCI Express Gen 4 has allowed companies, like Corsair, to release products like the MP600, which boasts a devastating speed of up to 4.9 GB/s. This isn’t even the peak, either, since PCI Express Gen 4 leaves room for even more improvements– up to twice as fast as Gen 3, in theory!

It’s no contest at all: NVMe has won the speed race. But does that mean it’s right for you?

Picking the right one for you 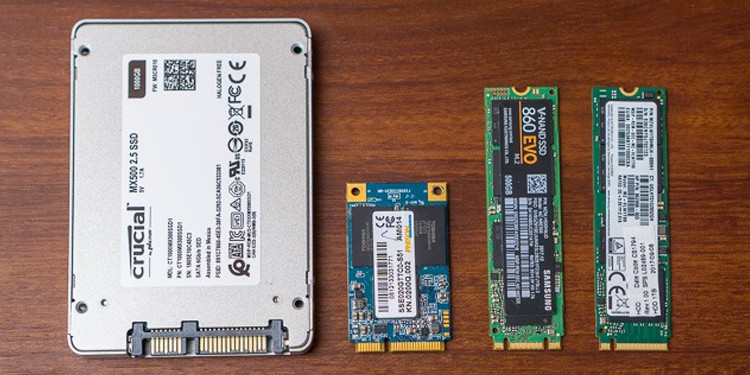 While we’ve hyped up NVMe SSDs quite a lot, that doesn’t mean they’re necessarily the right picks for everyone. Allow us to explain.

Which is better for general use?

For general use, the best pick is a SATA SSD. M.2 or 2.5-inch, it doesn’t really matter. Using an SSD at all is a dramatic leap in quality of life from using any mechanical hard drive, but you don’t get leaps on the same scale when you bump up to M.2 and NVMe. There are a few different reasons for this, but we’ll hyper-simplify it to make it easier to understand.

Let’s say that your PC takes 25 seconds to boot from a hard drive. You replace that hard drive with a SATA SSD, and now your PC can boot in 10 seconds. Further replacing that SATA SSD with an NVMe SSD may cut that boot time down even further– to 5 seconds, even!

…but that’s not nearly as big a difference in real-world use, is it? Either way is pretty darn fast. Once you get to your desktop and start launching apps, you’re unlikely to notice a difference… especially if the rest of your system can’t keep up. More on that in a bit.

Which is better for professional use?

For professional use, you want either an NVMe SSD or PCI Express SSD. At least if your job requires access to fast storage and frequent large file transfers, where all this extra speed will actually come in handy. If it doesn’t, you can probably pass.

Which is better for gaming?

Surely an NVMe SSD is the best for gaming, right?

It won’t make the difference you think it will. This is where our old friend bottlenecking comes into the equation.

While NVMe SSDs are far faster than any SATA drive, the rest of the system needs to keep up, too. The bulk of this burden will fall upon your processor, but even with a powerful processor like the i7-8700K, the difference is minimal in real-world gaming scenarios. If your processor is weaker than that, you may even experience worse performance.

Don’t get us wrong: you should still get an SSD, but unless you’re a true pro gamer or have the highest-end system at your fingertips… NVMe isn’t a super-necessary upgrade over a SATA hard drive. If you find an NVMe SSD at a good price, you should still go for it– and if you make a lot of large file transfers, then you may have legitimate incentive to buy it.

Otherwise, though, a SATA SSD will be best for most consumers, gamers and casual users alike.