It’s a relatively normal day. You wake up, brush your teeth, wash your face and start a coffee brew. While the coffee is brewing, you walk over to your ancient Core 2 desktop and hope that today, it will maybe fully boot up before your coffee is done. So you hit the power button. And then you wait…and wait…and wait some more… 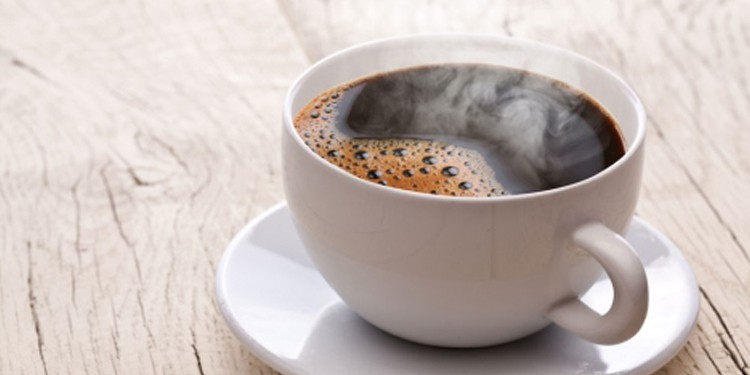 For many computer users, slow boot speeds due to dinosaur age hard drives are a thing of the past thanks to a relatively new type of storage called a Solid State Drive. Solid state drives (SSD) are commonly touted on the internet as being vastly superior to traditional hard disk drives (HDD). So what exactly is a Solid State Drive? And, more importantly, could it really help your boot times go from 5 minutes to 30 seconds?

Quick Note: This article focuses specifically on internal hard drives, though everything covered also applies to external hard drives. The main difference between the two is that external hard drives are bottlenecked by their connectors, ie USB ports. However, this is rarely a problem since modern USB types, which are included on notable SSDs, can read and write fast enough to keep up. (Read more about external SSDs here). 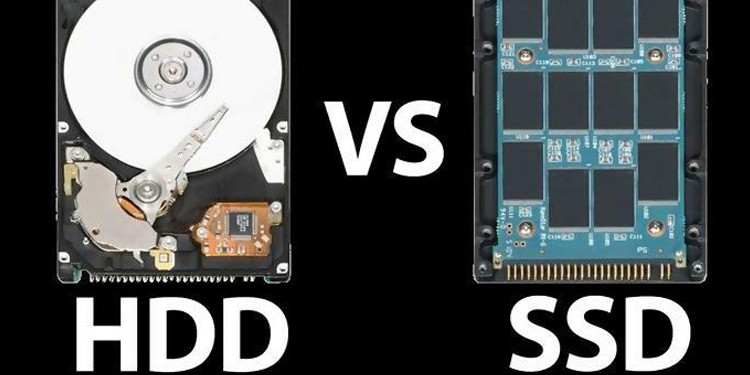 To understand the difference between SSD and HDD, perhaps it is best that I first explain how a Hard Disk Drive works.

Inside the shiny (or dusty) body of a hard drive, there are several metal platters with a magnetic coating that stores whatever data you put on it. The platters are stacked vertically and usually the more platters you have, the more storage your Hard Drive has. Above the platter is an arm that contains a “head” that reads and writes data to and from the Hard Drive while you’re using it. Platters come in a variety of speeds but the most common ones are 5400 RPM and 7200 RPM (rotations per minute). Obviously, the faster the disc speed is, the better the performance. Most laptops come with a 5400 RPM drive but can be upgraded to 7200 or higher.

HDDs store your data by using magnets. Imagine you need to send a message to a friend and all you have is a magnet and iron nail. You could stipulate that if the nail is magnetized, then you will see your friend later. Now, when your friend comes home and sees the nail sticking to their mailbox, they know your answer. In this way, we can use magnets to encode information.

An HDD is like a box that contains millions and millions of tiny iron nails, each one capable of storing a bit of information: either a 1 or a 0 (magnetized or unmagnetized).

As the arm reads each nail, it returns a 1 or 0, the entire string of binary digits corresponding to some piece of information stored on the drive. Of course, HDDs don’t actually have microscopic nails in them. The metal platters are divided into tiny sectors of a very small area, each of which can be independently magnetized (1) or demagnetized (0). As the arm goes over the platter, it checks to see if the sector is magnetized or not and returns the corresponding sequence of binary digits.

So say you want to store the number “65” on your HDD. In binary, 65 is represented as the string “1000001.” To do this, the arm on the HDD needs to find 7 consecutive unused “nails.” It then magnetizes the first one making a 1, skips over the next 5 making 5 zeroes and then magnetizes the 7th one making the last 1. 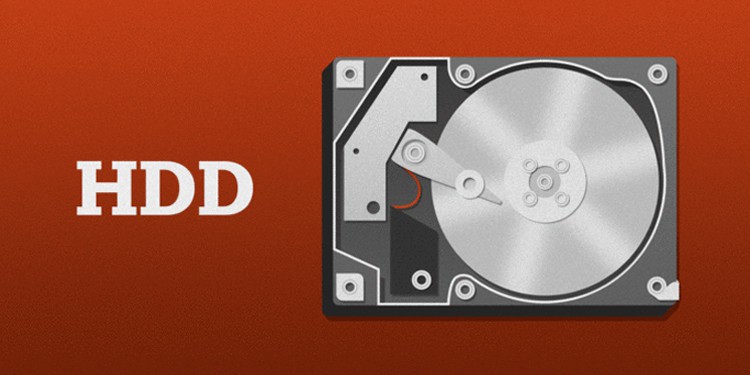 No matter how fast your Hard Disk Drive is, it can not keep up with a decent Solid State Drive (SSD). Down to the very basics, an SSD and an HDD do basically the same thing… but in very different ways.

Whereas a Hard Drive uses platters to store memory, an SSD uses interconnected flash-memory chips and doesn’t require a moving arm/head to read memory. The fewer moving parts you have, the better since moving parts wear out quicker, are slower (at least in this case), and more fragile.

A “typical” SSD uses what is known as “NAND flash memory.” This kind of memory is very similar to what’s found in USB flash drives. NAND flash memory involves storing information in a network of connected electrical cells. The exact sequence of information is encoded in the connections between these electrical cells. Each of these cells is divided into sections called “pages” and several pages together make a “block.”

This part is important because SSDs cannot individually write over specific pages. Unlike an HDD which can read and write virtually any section on the platter independently, SSDs need to handle memory in blocks. When you first buy a clean SSD, it has plenty of blank blocks that it can write to with blazing fast speed. As time goes on and these blocks get filled, there is less room to store data. As such, the SSD must go through a complicated procedure to check each individual block, see which pages are blank, rewrite the entire block, then write the new memory to the block.

This causes SSDs to get slower over time as the act of writing to memory becomes less efficient. However, this can be at least partially mitigated if you are using a larger drive that is rarely close to being full. Even taking this performance drop into account, SSDs are still much faster than HDDs, though.

Tangible Differences Between SSDs and HDDs 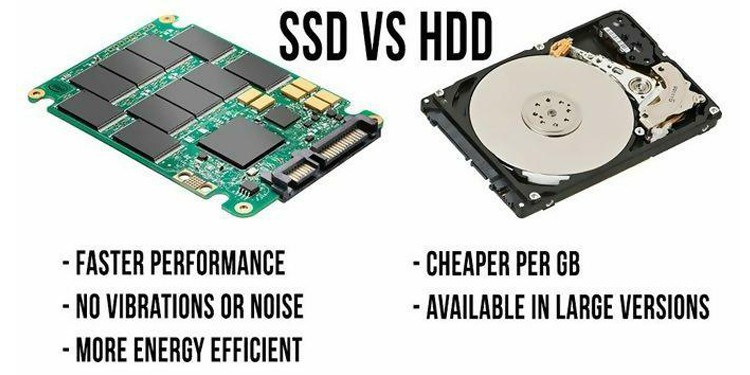 As with everything in this world, both types of storage have their advantages and disadvantages which I’ll list below:

As with most consumer-facing technologies, prices start off high but slowly plummet over time. According to PCPartPicker.com, a brand new SSD– which had a much smaller capacity– would have cost you $400 in December 2017; today they can be had for as low as $90. As flash memory becomes cheaper to produce, consumers can continue to look forward to lower prices across the board.

Still, if you need lots of memory on a budget, an HDD is the way to go. 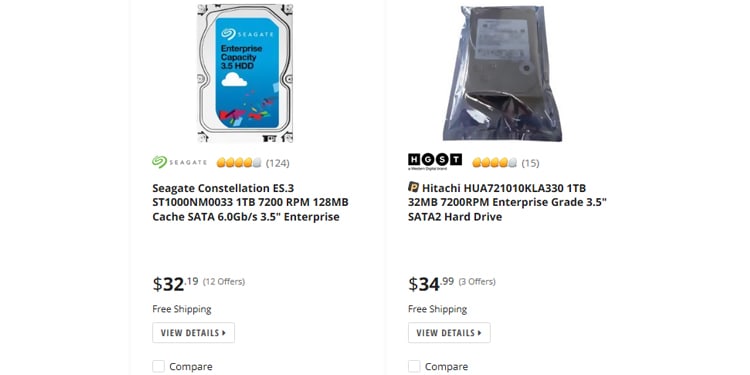 Remember how HDDs have moving parts? Well, they can cause a few problems. Some are relatively small, like some noise, but others are more… comprimising.

For instance, accidental drops can easily mess up HDDs. The arm in a Hard Drive contains a head which hovers above the platters while the disk is on and parks while they’re off. If you drop your laptop/desktop and the head hits, or even touches the disc, you’re in for a world of trouble.

Obviously, this cannot happen with a Solid State Drive because there aren’t any heads or discs to touch; thus, SSD’s win in the longevity department. Another concern with moving parts is the wear and tear they have to endure. The more a platter spins and the more data is read by an arm/head combo, the closer a Hard Drive gets to the end of its life.

However, it is worth noting that, even though SSDs generally beat out HDDs in terms of longevity, SSDs – due to the way they read and write information – can only handle a finite amount of reads/writes. Over time and repeated reads/writes, the electrical cells degrade and eventually will not be able to store information anymore.

For your average person, neither of these will be a big deal since you won’t read/write enough data. You’re more likely to just have it stop working.

Anyone who has watched CSI probably knows that it is possible to recover data from an HDD even when it has been permanently deleted (aka, the sectors have been demagnetized). This presents a security risk for users as their personal data can still be accessed from an old hard drive, provided it is still intact.

To be clear, it is entirely possible to recover deleted data from an SSD. Because of how an SSD reads/writes memory, writing over used data blocks may not always completely get rid of all old data. However, many SSDs have a built-in deletion mechanism that can completely get rid of data– it just depends on how exactly you get rid of it.

Additionally, since they are newer, techniques for extracting deleted information from SSDs are not as good as those for HDDs. In other words, an SSD might be more secure with your information, provided you know what you are doing with it.

HDDs and SSDs can both come in 2.5” or 3.5” form factors. These use the traditional SATA connector. While this is fine for HDDs, SATA does bottleneck SSDs.

While SATA SSDs are fine, if you are looking for ungodly speed, then M.2 NVMe SSDs, which utilize the PCI lanes on your motherboard, are what you truly want. Oh and these are also smaller, as can be seen below. We actually recently wrote a different article about the different types of SSDs, so be sure to check that out if you want to know more. 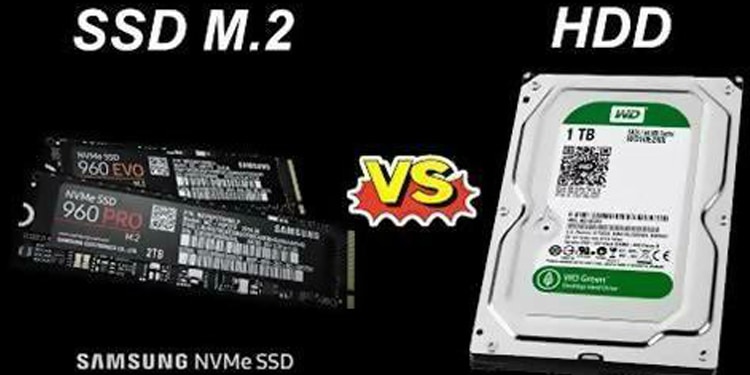 As stated above, just installing an SSD can significantly increase your system’s speed while booting and loading applications. Even a budget SSD will be faster than the highest end HDD’s thanks to their flash memory and lack of moving parts.

The difference between the two is the same as the difference between having to walk across the room to get a book and magically having the book open in front of you at all times. Below, you can see how much speedier my Samsung Evo 850 is compared to my Seagate Hard Disk Drive. 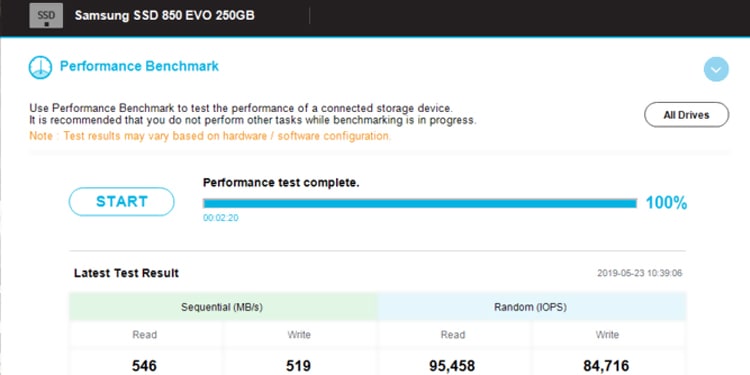 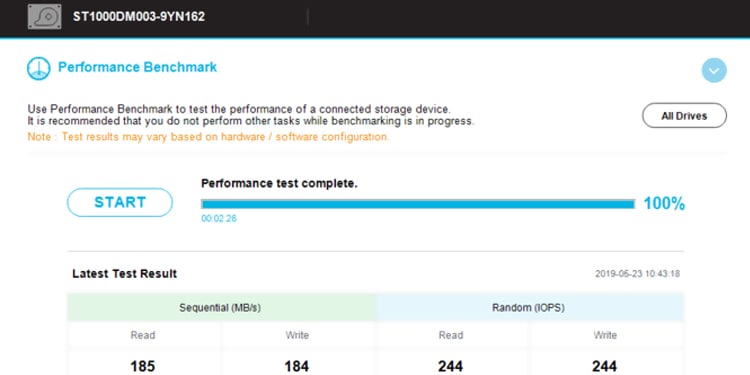 By the way, just in case you were confused by the above images, sequential access means the computer reads/writes info sequentially, starting from the beginning and reading to the end. It is faster than random access, which, as you may have guessed, means the computer can read information from anywhere in the data file. RAM uses this method to find data, hence the name “Random Access Memory”.

Overall, if what you’re looking for is snappy performance and longevity, then what you need is a Solid State Drive. However, if what you really need is tons of storage at dirt cheap prices, a Hard Disk Drive will still serve you well for years to come.

On the whole, SSDs come out on top in the SSD vs hard drive debate. Hopefully, the increased affordability of SSDs will eventually make them cheaper and more accessible to all users, not just the enthusiasts.

I think my coffee is done (I’m a fast writer.). Thanks for reading!